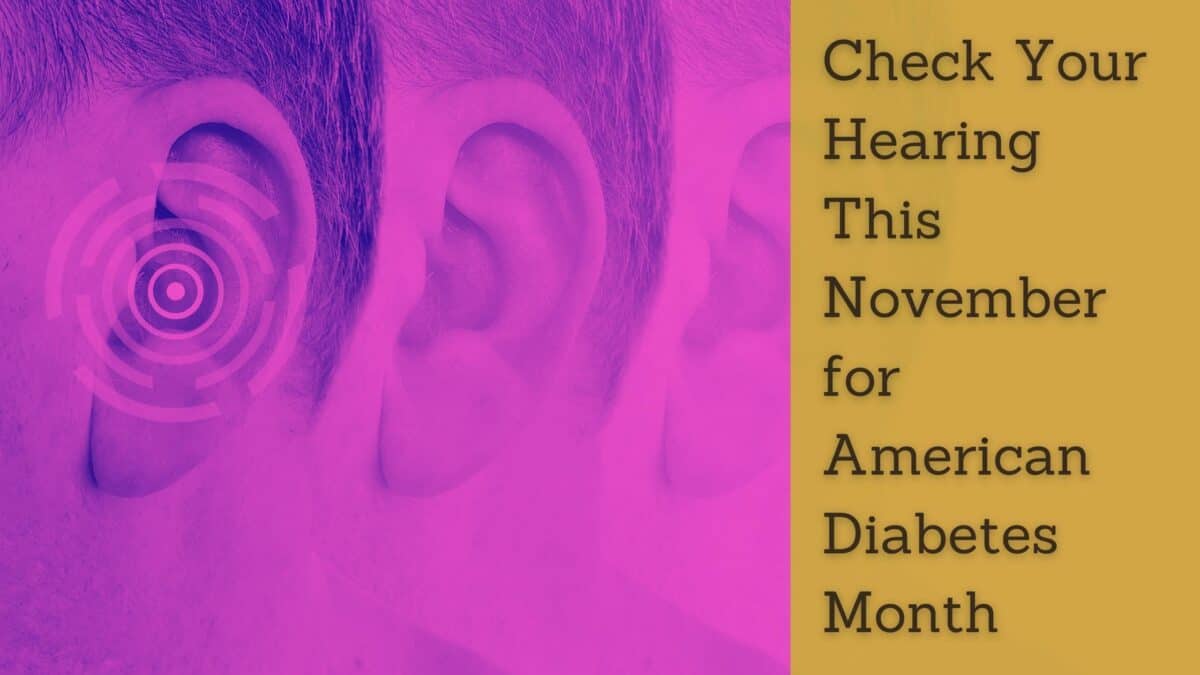 Check Your Hearing This November for American Diabetes Month

Do you ever feel excessively thirsty, or your vision becomes blurry? These are symptoms of a very serious condition. Diabetes affects an estimated 34 million people in the US and is expected to rise to 29 million, or 1 in 3 people by 2050. This and every November is American Diabetes Month, a national campaign designed to raise awareness around this devastating condition. This years’ theme focuses on prediabetes and early detection. When diabetes is detected early, it gives people a chance to modify behaviors which could put many aspects of your health in jeopardy, such as heart disease, kidney failure, nerve damage, blindness, and amputation. As hearing healthcare professionals, we put extra emphasis on the risks to your ears, which increase when diagnosed with diabetes.

Diabetes used to be a disease which affected the wealthy, due to access to sweet food and inactivity. Now diabetes has shifted into a condition which affects the poor due to lack of access to healthy food, stress, and a sedentary lifestyle. A study found that living in poverty increased the risk of diabetes by 26 percent. This may also be connected to access to health care. When people lack resources, it becomes more difficult to take action and address this serious issue.

Diabetes occurs when the body struggles to produce insulin, a hormone produced in the pancreas, which aids in the absorption of blood sugar (glucose) in cells. The cells rely on the absorption of glucose to distribute energy to muscles and tissue. The most common type of diabetes is type 2 – making up nearly 90 percent of all diabetes. It occurs when the body can make insulin, but not enough to supply or to be properly absorbed by cells. This can cause damage throughout the body, from the extremities, to the heart, to the nerves, to the eyes, and to the ears.

A Correlation Between Diabetes and Hearing Loss

In 2017, the American Diabetes Association reported: “that hearing loss is twice as common in people with diabetes as it is in those who don’t have the disease”. This may be in part due to how we hear. While the ears collect sound, it must be delivered to the brain to truly hear. The ears deliver sound via tiny hair-like cells in the inner ear called stereocilia. They rely on a healthy supply of blood to stay heathy and are most likely deeply affected by the effect on the body, caused by diabetes. Even prediabetes, in which the body has high blood sugar, but not enough to be considered diabetes proper—increases the risk of hearing loss by 30 percent.

Once you reach 45 years old the risk of developing diabetes goes up significantly. Other risk factors include being overweight, a sedentary lifestyle poor eating habits, family history and ancestry such as African American, Hispanic/Latino, American Indian, Asian American, or Pacific Islander. It is recommended that once your reach 45, you be screened for diabetes every three years, but if you have more predispositions, such as those listed above, you should test your blood sugar annually.

If you have been diagnosed with diabetes or prediabetes it is important to follow your doctor’s advice. Measure your glucose levels daily and take prescribed medications on schedule. In addition, the effects of blood sugar can be mitigated by staying active, exercising regularly, and prioritizing a diet of vegetables, whole grains, and lean protein, while avoiding processed sugar.

Because the risk of hearing loss goes up significantly when living with diabetes or prediabetes, it should be normalized that a diagnosis should also be accompanied with a hearing loss in the near future. Unaddressed hearing loss causes communication issues which can quickly decline into isolation, chronic depression, cognitive decline, and lack of mobility. Untreated hearing loss has also been found to increase the likeliness of falls, accidents, and hospitalizations, due to lack of awareness of audio clues around.

Fighting diabetes includes maintaining healthy hearing. Use this November as a call to action. Schedule a hearing test today and join the fight against this chronic condition.